One resolution, one bill passed at NA’s November 16 meeting

Legislators adopted a resolution on urban administration model in Ho Chi Minh City and the revised law on HIV/AIDS prevention and control on November 16 during the plenary session of the National Assembly’s 10th sitting. 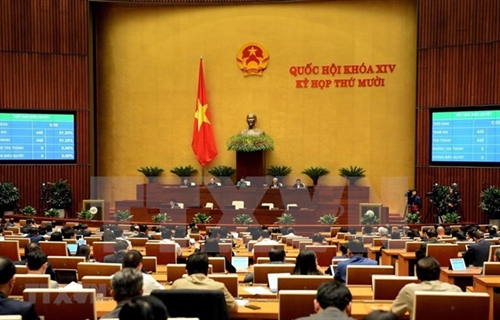 The resolution was voted in favor by 420 deputies, or 87.14 percent of the total, while the HIV/AIDS bill received 91.29 percent of votes in favor.

In the morning, NA deputies debated the draft of the amended Law on Road Transport, which comprises six chapters and 102 clauses regulating road infrastructure, vehicles, transportation, and State management of road transport. In the afternoon, they discussed the bill on Road Traffic Order and Safety.

On November 17, the lawmakers will cast votes on a resolution on pilot management and use of land for defense and security purposes in combination with production and economic development and discuss a draft law on forces for protection of security and order at grassroots level in the morning.

In the afternoon, they are scheduled to approve the revised Law on Environmental Protection and set the date for next year’s general election of deputies to the 15th National Assembly and all-level People’s Councils for the 2021-2026 term.

NA Chairwoman Nguyen Thi Kim Ngan will also deliver a remark to conclude the 10th sitting during the closing session, to be broadcast live by Radio the Voice of Vietnam, the Vietnam Television, and the NA’s TV channel.