As the western gateway to the Mekong River delta, Kien Giang province borders An Giang and Hau Giang provinces and Can Tho city to the northeast and east; Ca Mau and Bac Lieu provinces to the south; the Gulf of Thailand to the west with a coastline of 200 kilometers; and Cambodia to the north with a borderline of 56.8 kilometers. Covering some 6,348 square kilometers, Kien Giang province has a population of 1.72 million (according to the 2019’s statistics) and is home to 27 ethnic groups with Kinh (Viet) being the most populous, followed by Khmer and Hoa. It has two cities (Rach Gia and Ha Tien) and 13 districts, including Phu Quoc and Kien Hai island districts.

Kien Giang is connected with the southernmost province of Ca Mau by coastal route R10, which is also known as the Southern Economic Corridor. The route starts in Ca Mau province and runs through Kien Giang province, and four Cambodian provinces of Kep, Kampot, Sihanoukville and Koh Kong to Thailand’s capital of Bangkok. The travelling time from Kien Giang to Ho Chi Minh City and other localities in the Mekong River delta will be shortened thanks to the constant upgrading of National Highway 80, the Lo Te-Vam Cong expressway which is scheduled to open in September and Ha Tien-Rach Gia-Bac Lieu four-lane road which will be built with a total length of 225 kilometers. 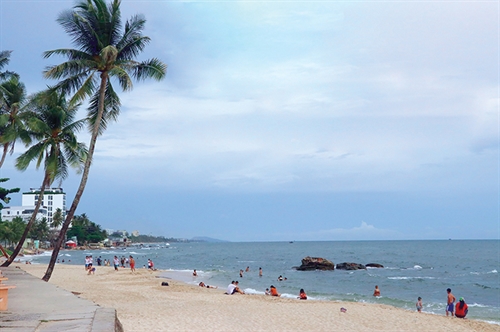 At present, Phu Quoc airport accomodate almost 80 flights and around 12,000 passengers per day.

Budget carrier Vietjet plans to open two domestic routes from Phu Quoc island to Da Nang city and Van Don island district in Quang Ninh province by the end of this year and in the middle of next year, respectively, with a frequency of seven flights per week, and two international routes to China’s Chengdu and Chongqing cities by the end of this year with three round-trip flights per week.

As a result, Phu Quoc international airport will have six domestic routes connecting Phu Quoc with Can Tho, Ho Chi Minh, Da Nang and Hai Phong and Hanoi, and Van Don island district, and five international routes to the Republic of Korea, China, Thailand, Malaysia and Russia.

According to the Kien Giang Department of Planning and Investment, the province currently hosts 53 foreign direct investment (FDI) projects from 19 countries and territories which have a total capital of USD 2.75 billion. These projects are specialized in tourism, agriculture, processing, manufacturing, trade and services.

Director of the Kien Giang Department of Planning and Investment Nguyen Thong Nhat told Van Hoa Doanh Nhan (Business Culture) newswire that the province would call for investment in projects on aquaculture and tourism development on islands and archipelagoes in order to develop modern and civilized urban centers in harmony with nature.

Kien Giang was also seeking investment in hi-tech and organic agriculture, wastewater treatment and other environmental projects for its sustainable development, he added.

To build a transparent, open and fair investment and business environment, Chairman of the provincial People’s Committee Pham Vu Hong has committed to creating favorable conditions for investors in access to projects in order to make the best use of the province’s advantages and potential and minimize possible risks.

According to the Kien Giang Economic Zone Authority, the province has introduced numerous incentives for investors. Accordingly, projects on the list of sectors prioritized for investment would enjoy land rental exemption during the project implementation. In the meantime, seafood and farm produce processing projects are entitled to corporate income tax exemption as provided by the tax laws. Other projects will also enjoy a corporate income tax rate of 10 percent for 15 years after being entitled to tax exemption for four years and 50-percent tax reduction for subsequent nine years.

Kien Giang province is blessed with major coastal urban centers and beautiful landscapes with 137 islands, including Phu Quoc island that was voted by CNN as one of the 19 best destinations in Asia in 2019 and one of the five best-ever tourist destinations in Asia-Pacific Ocean in autumn or described by The Telegraph of the UK as “Vietnam’s secret beach paradise” made up of 26 islands, diverse ecosystems, sunny beaches, delicious seafood and friendly people.

The province is also well-known for U Minh Thuong – the only nature reserve in Vietnam recognized as ASEAN Heritage Park and Ramsar site, and Phu Quoc National Park as part of the Kien Giang biosphere reserve, which was recognized as a World Biosphere Reserve by the United Nations Educational, Scientific and Cultural Organization (UNESCO) in 2006. In addition, its traditional Phu Quoc fish sauce has been accepted by the European Union for protection of “Phu Quoc” geographical indication.

Kien Giang is also renowned for old cultural and historical sites and traditional festivals, including the Ok Om Bok, also called the Festival of Worshipping the Moon, which is one of three main festivals Khmer people celebrate every year.

Due to impacts of the COVID-19 pandemic, the province’s hospitality sector is suffering drops in the number of international arrivals and revenues.

Worthy of note, Phu Quoc island alone received almost 2,450 foreign arrivals in June, bringing the total number of foreign tourists in the first half of the year to more than 142,260.

According to Director of the provincial Department of Tourism Tran Chi Dung, Kien Giang will develop environment-friendly, diversified and specific tourism products with priority given to island, cultural and ecological tours.

The province has issued green tourism logos to restaurants, hotels and travel agents that meet environmental standards and sustainable development requirements, he added.

To restore the sector’s development after the pandemic, the province plans to promote its tourism images in the mass media and social networks and invite domestic and foreign travel agencies to the province’s tourism promotion events carrying the message “Kien Giang – a friendly and safe destination”.

“The hospitality will choose a suitable time to tap potential markets with convenient flight routes from the Republic of Korea, Japan, Taiwan (China), India, the US, and Canada,”  Dung told Kien Giang province’s website.

The Trade, Commerce and Tourism Promotion Center has recently explored tourist spots in Kien Giang and Ca Mau provinces and discussed with the two provinces’ travel agencies the possibility to exploit the Phu Quoc-Nam Du-Ca Mau coastal tourism route, among others.