Located in the heart of the Mekong River delta and between the Tien and Hau rivers, Vinh Long province borders Tien Giang and Ben Tre province to the north and northeast, Tra Vinh province to the southeast, Hau Giang province and Can Tho city to the southwest and Dong Thap province to the northwest. Covering nearly 1,480 square kilometers, Vinh Long province has a population of over 1 million (according to the 2019’s statistics) and is home to Kinh (Viet) being the most populous group that accounts for around 97.3 percent of its population, followed by Khmer, Hoa and other ethnic groups. It has a provincial city with the same name, Binh Minh town and six districts. 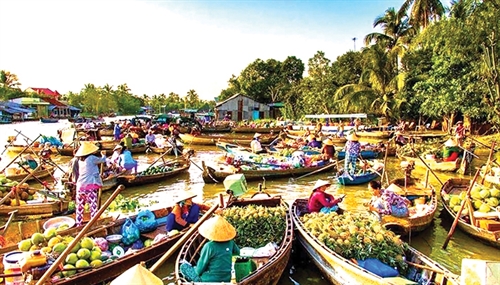 With its advantages and potential, its authorities’ support and the business community’s capacity, experiences and determination, the province hopes to create breakthroughs in investment attraction.

The above results are partly attributable to its third place among 63 localities nationwide and its second spot in the Mekong River delta region in the 2019 provincial competiveness index (PCI) ranking.

The province currently hosts 66 FDI projects with a total capital of USD 867.4 million USD. These projects are specialized in leather footwear and food processing.

Director of the Vinh Long Planning and Investment Department Truong Dang Vinh Phuc recently told Van Hoa Doanh Nhan (Business Culture) newswire that the province would give priority to projects on hi-tech agriculture and processing and preservation of farm produce and other local competitive products using advanced and environment-friendly technologies.

At present, the province is offering numerous incentives for investors. Specifically, projects investing in manufacturing steel, energy-efficient products, machinery and equipment for agriculture, forestry, fisheries and salt production as well as animal feed production are entitled to a corporate income tax rate of 20 percent for ten years. Meanwhile, investment projects in scientific research and technological development, applying high technologies on the list of high technologies prioritized for development investment provided in the Law on High Technologies will enjoy a low corporate income tax rate of 10 percent for 15 years.

In addition, the provincial authorities have held two dialogues with entrepreneurs and investors in the locality every quarter so as to help remove difficulties and solve investment formalities-related problems.

With a dense network of rivers and canals, mild climate and fertile soil and some 40,000 hectares of orchards, Vinh Long is enriched with an evergreen ecosystem. The province also boasts 11 national and 44 provincial historical and cultural relic sites. It is well known for traditional craft villages that make rice crepes, bricks and tiles, porcelain and pottery, rattan wares and forging. These have turned the province into an ideal destination for tourists with its abundant local offerings such as orchard and river tours, and tours to craft villages and cultural and historical relics.

The province has a total of around 100 homestays, guest houses and hotels, 40 tourism spots, and over 50 orchards of tropical fruits like grapefruit, custard apple, dragon fruit and rambutan. Worthy of note, it has 25 standard homestays, two of which reached the ASEAN homestay standard for 2017-2019 and 2019-2021.

Director of the Vinh Long Culture, Sports and Tourism Department Phan Van Giau told Tin Tuc newswire of the Vietnam News Agency that Vinh Long was regarded as the first locality to have combined homestay and ecological orchard tours.

However, despite its efforts to invest in expanding this type of tour, the province’s tourism development has failed to fully tap its potential and competitive advantages.

In order to turn the “smoke-free” industry into an economic spearhead sector by 2030 and make tourists stay longer in the province, Vinh Long is building its own unique tourism brand by offering hat boi (classical drama) shows performed by the local Dong Thinh art troupe on a trial basis as entertainment for tourists.

“The local Dong Thinh art troupe was selected by the Ministry of Culture, Sports and Tourism to perform in the 2007 Smithsonian Folklife Festival in Washington DC,” said Giau, adding that the art has been handed down through generations in the locality.

Pham Thi Ngoc Trinh, owner of Ut Trinh homestay – the first one in hosting hat boi shows – said that her homestay has organized more than 10 classical drama shows, allowing tourists to enjoy the performance and meet with artists, learn how to act and how to do make-up for a performance.

Due to high expenses for such a show, the provincial Culture, Sports and Tourism Department has provided support to homestay owners in organizing such shows to impress tourists.

The sector is expected to welcome 1.6 million tourists, including 220,000 foreigners, and earn a turnover of VND 800 billion this year.

It has worked out a plan to develop special tourism products (tours) of four groups: tours to learn about local cultural figures, tours to handicraft villages, homestay tours, and ecological tours to fruit gardens.

However, due to impacts of the COVID-19 pandemic, the province’s hospitality sector has suffered from drops in the number of international arrivals and revenues since March this year. Several travel agents were forced to shut down while many tourist companies had to halt their operation.

To restore its development after the pandemic, the sector has launched a tourism promotion program for domestic tourists by encouraging businesses to cut down service prices and cost of tours as well as offer accommodations and entrance fee discounts.