WINCOLAW sues local company for infringing its trademark, seeks compensation of US$1.5 million

Vietnamese companies have been warned to be more cautious about intellectual property rights to ensure their operation in an integrated economy.

The company also asked the court to force these two companies to pay up to VNĐ35 billion in compensation, change their trade names, and issue public apologies.

WINCOLAW said the basis for the lawsuit is the Certificate of Trademark Registration No. 60668, which was issued by the National Office of Intellectual Property of Việt Nam in 2005 for the trademark “WINCOLAW and image”.

Do you think there is a similarity which could cause confusion when comparing the trademark “WINCOLAW and image” and the sign “INCOLAW”, with both companies providing legal consulting and intellectual property services?

To assess whether a sign has a level of similarity leading to mistakes with the protected trademark, we need to look at Article 74.1, Article 74.2 (e) of Law on Intellectual Property in Việt Nam and Point 39.8 of Circular No. 01/2007/TT-BKHCN.

In this case, the trademark

is the combination of two main components, including

, which was protected under the Certificate of Trademark Registration No. 48152 issued on June 20, 2003, and

These two components are distinguishable, in which the word “WINCOLAW” is written in bold to make a strong visual impact.

On the other hand, since it is formed using letters, the “WINCOLAW” part is easier to remember via pronunciation, oral transmission or broadcast media. So, this component will play a bigger role when it comes to assessing the distinction.

will cause confusion of the rights holder, especially when using similar sign to “WINCOLAW”.

It is noticeable that the sign “INCOLAW” is just lacking the letter “W, while the rest is similar to “WINCOLAW and image” in both letters and order.

Also, INCOLAW provides legal and intellectual property consulting services, which are coincident to services protected under the Certificate of Trademark Registration No. 60668 of the trademark “WINCOLAW and image”.

Based on mentioned regulations, we conclude that “INCOLAW” is similar to the level which creates confusion with “WINCOLAW and image”.

The National Office of Intellectual Property of Việt Nam appraised and refused to issue certificates for many cases like this one, such as: 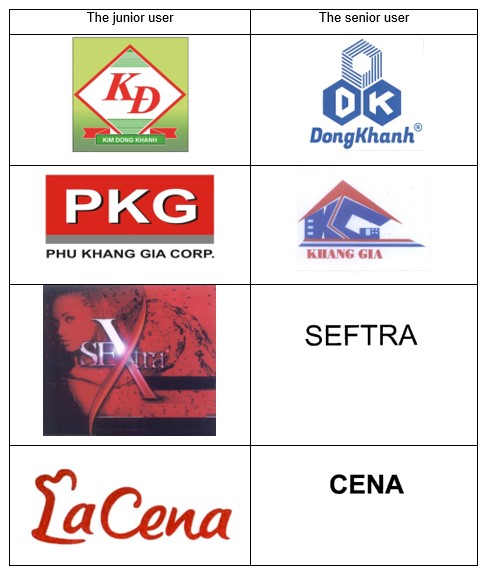 According to WINCOLAW, in document No. 28/2020/ICL that was issued on October 20 sent to the company, INCOLAW stated that: “The trademark ‘WINCOLAW and image’ is protected as a whole, which includes two parts: (i) word part ‘WINCO’ and ‘WINCOLAW’; (ii) image part, but not the single part ‘WINCOLAW’. The main component of the trademark is the image, not the word WINCOLAW.

Meanwhile, the sign ‘INCOLAW’ consists of the word ‘INCOLAW’, in which the letter O is presented as a stylised clock, and letter A is also presented as an up arrow. So these two brands are totally different from each other”.

What do you think about INCOLAW’s statement?

In my opinion, the defendant’s statement is not in line with regulations I mentioned above. As I said, in a trademark that has a combination of word and image, the word component always plays a more important role than the image part when it comes to differentiation. Because it can be remembered not only by reading, but also by oral transmission or media broadcast.

According to WINCOLAW although INCOLAW affirmed that it would apply for appraisal and appropriate measures after the result, the company haven’t completed the appraisal.

WINCO asked the Việt Nam Intellectual Property Research Institute of the Ministry of Science and Technology to appraise the sign “INCOLAW” and the trademark “WINCOLAW and image”.

In the appraisal No NH235-20YC/KLGĐ issued on June 8, the Institute concluded that:

1. The sign “INCOLAW” in INCOLAW International Consulting Company Limited is similar to a level which creates a mistake to the trademark protected under the Certificate of Trademark Registration No. 60668 of the Vietnam-International Patent, Trademark & Copyright Law Firm.

2. The sign “INCOLAW and image” used in the content on incolaw.com is an infringement of the trademark protected under the Certificate of Trademark Registration No. 60668 of the Vietnam-International Patent, Trademark & Copyright Law Firm.

Do you think this conclusion could be evidence for the court to consider a legal claim from the plaintiff?

According to Article 94 of the Code of Civil Procedure 2015, the conclusion of the appraisal is identified as a source of evidence. It will be a basis for the court to identify facts of the case, as well as to determine whether involved parties’ requests or objections are valid and legal.

Do you think the plaintiff’s demand to the court forcing the defendants to pay compensation of VNĐ35 billion for using the illegal trademark is reasonable?

This case’s compensation level can be measured according to Article 584 of the Civil Code 2015 relating to compensation responsibility, Article 205 of the Intellectual Property Law and other related rules.

If WINCO can prove the trademark infringements of INCOLAW International Consulting Company Limited and INCOLAW Law Company Limited have caused physical damage, then the company can ask the court to decide the compensation level based on Article 205 of the Intellectual Property Law.

The defendant is also required to stop using the sign “INCOLAW” and the domain name, change the trade name and issue a public apology. VNS