Home » News » Law on Exit and Entry of Vietnamese Citizens

Law on Exit and Entry of Vietnamese Citizens

The Law on Exit and Entry of Vietnamese Citizens (the Law), which is the first of its kind in Vietnam, has institutionalized the 2013 Constitution regarding citizens’ right to free movement and residence within the country and their right to leave the country and return home from abroad.

Coming into force from the beginning of July, the 52-article Law is expected to facilitate and better control the exit and entry of Vietnamese citizens.

According to the Law, persons aged full 14 years or older may choose to get passports issued with or without embedded electronic chips. The Law lists four cases in which persons may have ordinary passports issued according to summary procedures: (i) persons who lose their ordinary passports while going abroad and wishing to return home immediately; (ii) persons subject to expulsion under decisions issued by competent authorities of host countries and having no passports; (iii) persons required to return home under treaties or international agreements on acceptance of repatriating citizens; and (iv) persons eligible for issuance of ordinary passports for national defense and security reasons. 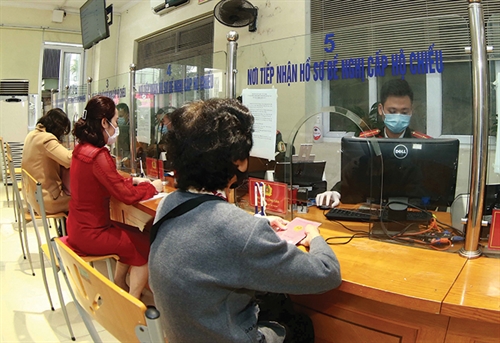 Conditions for exit and entry

A Vietnamese citizen may leave the country when he has an immigration paper which remains intact and unexpired; for a passport, its validity duration must be at least full six months; has a visa or another paper certifying or evidencing the country of destination that permits his entry, unless he is entitled to visa exemption; and is neither banned from exit nor has his exit postponed.

In addition, persons having lost their civil act capacity and persons with difficulties in perceiving or controlling their acts as defined in the Civil Code, and persons aged under 14 years must be accompanied by their lawful representatives.

Regarding entry, Vietnamese citizens may enter the country when their immigration papers remain intact and unexpired.

The Law has perpetuated current regulations on exit postponement and adds new provisions in conformity with the 2015 Criminal Procedure Law.

Article 36 of the Law defines persons subject to exit postponement, including:

– The accused and defendants; and persons denounced or proposed to be subject to initiation of criminal proceedings who, through inspection and verification, are suspected to have committed a crime and it is deemed necessary to immediately prevent them from absconding or destroying evidences in accordance with the Criminal Procedure Code;

– Obligors defined in the civil procedure law, if there are grounds to believe that the settlement of criminal cases relating to their obligations toward the State or agencies, organizations or individuals and their exit might affect the settlement of such criminal cases or affect the interests of the State or lawful rights and interests of such agencies, organizations or individuals, or to secure judgment execution;

– Civil judgment debtors, and at-law representatives of agencies or organizations obliged to execute judgments or rulings in accordance with the law on execution of civil judgments whose exit is believed to affect the interests of the State or lawful rights and interests of agencies, organizations or individuals, or to secure judgment enforcement;

– Persons coerced and representatives of organizations coerced to execute administrative sanctioning decisions and it is deemed necessary to immediately prevent them from absconding;

– Persons subject to inspection, examination or verification who are believed to have committed particularly serious violations and it is deemed necessary to immediately prevent them from absconding;

– Persons suffering spread infectious dangerous disease and it is deemed necessary to immediately prevent the disease spreading or infection in the community, unless their entry is permitted by foreign authorities; and,

– Persons whose exit is believed by a functional authority to affect national defense and security.