The ninth session of the 14th National Assembly (NA) wrapped up on June 19 after 19 working days with both in-person and online meetings.

She said the ninth session was shorter than previous sessions but the NA still completed the agenda which included urgent and important contents in the context the country is taking COVID-19 prevention and control measures.
The NA did not hold a question and answer session but lawmakers still sent draft documents to cabinet members and sector leaders to solicit questions, Ngan said. 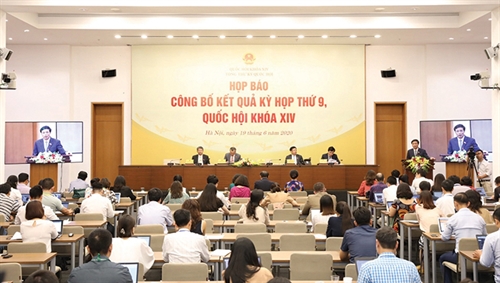 The ratification of treaties was an important step in international economic integration, especially the participation in new-generation free trade agreements with higher standards. The agreements also open up new development opportunities, affirming Vietnam’s determination to implement labor-related commitments in trade agreements, as well as fulfilling the obligations of an ILO member, the top legislator said.

The 10 laws passed at this session include two new laws concerning mediation and dialogue at court, and investment in the form public-private partnership (PPP). Eight revised laws are those relating to youth, organization of the NA, enterprises, construction, investment, promulgation of legal documents, disaster prevention and control and dikes, and judicial assessment. Except the revisions to the law on disaster prevention and control and law on dikes which will take effect on July 1, 2021, the other nine laws will come into force from the beginning of 2021.

The six bills put for debate at this session include the draft laws on Vietnam Border Guards, and international agreements, and draft amendments to the laws on environmental protection, residence, Vietnamese guest workers, and handling of administrative violations.

It is required that management of PPP investment must comply with the national socio-economic development strategy and master plan as well as relevant master plans while ensuring effective management and use of state resources in PPP projects. The inspection, audit or supervision of PPP projects must not obstruct normal business investment operations of investors. In addition, PPP investment activities must guarantee harmony of interests of the State, investors, users, and the community.

The investment policy on a PPP project may be adjusted when there is a change in objectives, location, scale or contract type of the project; an increase of 10 percent or more in total investment, or an increase in the value of state capital amount in the project in case the project is affected by a force majeure event, a change in relevant master plans, policies or laws, or when the feasibility study report is adjusted.

Mediation and dialogue will be carried out before the court accepts a civil, marriage and family, trade or labor lawsuit; a lawsuit against an administrative case falling under court jurisdiction; or a request for recognition of a voluntary divorce.

The law is expected to reduce the number of cases and matters to be brought to court for trial, and settle disputes and conflicts among people, thus helping save costs, time and efforts of the State and involved parties.

During this session, the NA adopted the resolution on distribution of non-refundable aid, adjustment of state budget expenditure estimates, and approval of final accounts of the 2018 state budget.

It also passed the resolution approving the investment policy on the national target program on socio-economic development in ethnic minority and mountainous areas during 2021-30, which aims at improving livelihood of ethnic minority groups.

The program sets a target of doubling monthly per-capita income of ethnic minority people in the next five years to VND 2.2 million from the current VND 1.1 million.

It aims to improve infrastructure systems, create jobs and address pressing issues for more than 16,100 ethnic minority households and disadvantaged ethnic groups by 2025.

By 2030, per-capita income of ethnic minority people is hoped to equal half of the national average. The program also aims to reduce the rate of poor households to below 10 percent of total households, with no hamlets or communes classified as extremely difficult and 70 percent of communes in ethnic minority and mountainous areas meeting new-style countryside criteria.

The legislature also approved resolutions on formation of the National Election Council and election of NA Chairwoman Ngan as the council chairperson. It adopted another resolution ratifying the list of four vice chairpersons and 16 members of the council.

The NA decided to terminate from July 1 the pilot grant of e-visas for foreigners on entry into Vietnam.

Particularly, the NA adopted the resolution on specific financial-budgetary policies and mechanisms for Hanoi capital, which will take effect on August 15 and be valid for five years.

Under the resolution, the Hanoi People’s Council may decide to collect some charges and fees specific to the city which are not on the list of charges and fees provided under the Law on Charges and Fees, and adjust the listed charges and fees, except those belonging to the central budget.

As resolved, the ceiling of debts must not exceed 90 percent of revenues on the principle that the capital city must ensure its solvency.

The city will be allowed to use the financial reserve fund to invest in infrastructure projects under a medium-term public investment plan. It must ensure the recovery of investment amounts within 36 months.

It will also be permitted to spend the municipal budget’s fund reserved for regular expenditures on upgrading and building essential items in existing facilities of public non-business units and socio-political organizations. The city can use its budget to support other localities in the country.

Nguyen Duc Hai, Chairman of NA’s Committee on Financial and Budgetary Affairs, said the regulation creates flexibility for the city in management without exerting large impacts on budget balance while encouraging local governments to use public assets more effectively.

The NA also approved a resolution piloting the urban administration model in the central city of Da Nang and some other specific mechanisms and policies.

Like Hanoi, Da Nang may collect some charges and fees which are not on the list of charges and fees referred to in the Law on Charges and Fees and will be allowed to use the financial reserve fund to invest in its own socio-economic infrastructure projects.