On the occasion of being in Viet Nam for organization of the WIPO Regional Forum on University – Industry Collaboration to Promote Technology Transfer on November 2 to 4, 2011, in Hanoi, Mr. Geoffrey Onyeama, Deputy Director General of World Intellectual Property Organization (WIPO) paid a courtesy call to the Vice Minister of Science and Technology, Mr. Chu Ngoc Anh.

The WIPO’s Deputy Director General appreciated great efforts and significant achievements that Vietnam has made in the field of intellectual property in recent years. He confirmed WIPO’s commitments in assisting Viet Nam to develop a modern intellectual property system to serve the country’s socio-economic development; in particular, WIPO would support Viet Nam in formulating its National Strategy on Intellectual Property and developing the Center for IP Assets Development. Vice Minister Chu Ngoc Anh thanked WIPO for its precious and effective supports rendered to Viet Nam so far that played an important role in developing and improving Vietnamese intellectual property system. The Vice Minister re-affirmed Vietnam’s perspective on the development of a balanced and efficient intellectual property system and suggested WIPO to continue supporting the country in the traditional areas of cooperation, such as exchange of high-level visits, exchange of patent information, training of human resources and public awareness-raising. Especifically, to meet demands of the socio-economic and cultural development of the country in the coming period of time, he asked the Deputy Director General for supports in formulating and implementing the National Strategy on Intellectual Property, and developing the Center for IP Assets Development, as well as facilitating Viet Nam to participate in projects being implemented within the framework of the WIPO Development Agenda, such as accessing to patent databases, technology transfer, branding development, etc. In the witness of the Vice Minister, Mr. Ta Quang Minh, Director General of National Office of Intellectual Property of Viet Nam (NOIP) and Mr. Geoffrey Onyeama, WIPO’s Deputy Director General signed an Agreement extending the Cooperation Agreement between two Offices on supporting the development of the NOIP’s Standing Office at the Hoa Lac Hi-Tech Park to be the Center for IP Assets Development. 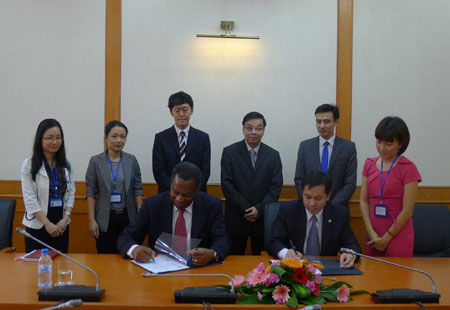 At the meeting with Vice Minister of Science and Technology cum Chairman of Management Board of the Hoa Lac High-Tech Park, Mr. Nguyen Van Lang, the WIPO’s Deputy Director General again affirmed WIPO’s commitments in supporting NOIP in successful development and implementation of the Centre for IP Assets Development in Hoa Lac High-tech Park. Reported to the Vice Minister and the WIPO’s Deputy Director General, NOIP’s Director General Ta Quang Minh said the Center is established with the purpose of providing fast and efficient patent information to organizations operated within the Hoa Lac High-tech park in particular and over the country in general; supporting in putting patent information into practice to generate benefits for people and businesses. At the time being, the Project on Establishment of the Centre had been submitted for approval. To create a spring board for intellectual property activities in the High Tech Part and facilitate the establishment of the Center, since 2009 the Standing Office of NOIP was established and put into operation there. Vice Minister Nguyen Van Lang committed the support of the Ministry of Science and Technology for the establishment of the Center and promised to create favorable conditions for the implementation of this project. He also stressed that the Center would be needed supports and assistance from WIPO, especially on professional issues related to intellectual property to be well operated.